It is a lengthy stretch - over 2km long and up to 40m wide - of deep golden sand backed by natural dunes and cliffs topped with tamarisk trees, which is also a paradise for naturists and most likely will become an official naturist beach. At the southern end is the Kommos taverna, a short walk away from the famous archaeological site. The lifeguard is to be found here, near the umbrellas and sunbeds, as well as toilets and a shower. Towards the northern end of the beach the sea bed is rock shelf, but at the taverna end it is sandy. The sand quality is good and the beach is very clean; if you enjoy snorkelling there are many fish to be seen.

The excavation of a major Bronze Age site has been ongoing at Kommos since 1976. Kommos first attracted the attention of archaeologists in 1924, when the famous excavator of Knossos, Arthur Evans, heard of large storage vessels being found there. Kommos was in fact a major port, with monumental Minoan palatial buildings, massive stone storage complexes, and a Minoan town (ca. 1800-1200 B.C.). Post-Minoan remains include a Greek Sanctuary that was active until the Early Roman period, when the site was abandoned (ca. A.D. 200). The artefacts discovered there come from as far away as Cyprus, Egypt, and Sardinia.
Kommos is also widely considered to be the best nudist beach on Crete; Captain Barefoot thought it was wonderful and gives it a rating of 96%. The naturist section of this beach starts just north of the archaeological ruins and is more than half a kilometre long. There is some shade under trees at the back of the beach. There is plenty of room for everyone, even at weekends, and for your further enjoyment, “The Cakeman” can bring you delicious homemade cakes and coffee while you sit in the sand and watch the waves.

One other point about Komo Beach.

Those visiting the beach should be aware that the beach is not only for them but it is also a nesting beach for the loggerhead sea turtle (Caretta caretta) and is monitored each year by Archelon, the Sea Turtle Protection Society of Greece. Any nests should not be disturbed, and hatchling turtles should not be "assisted" to the sea (it is essential to their development that they find their own way), though it would help to provide them with shade as they walk to the sea if they accidentally emerge during the day. In particular, the beach should not be visited at night during the nesting season. And as with all beaches, litter should not be left - considerate tourists leave only footprints in the sand. 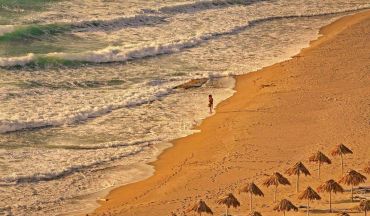 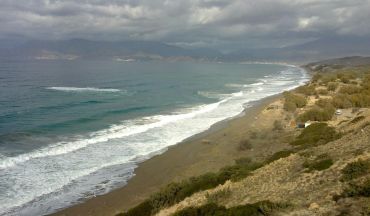 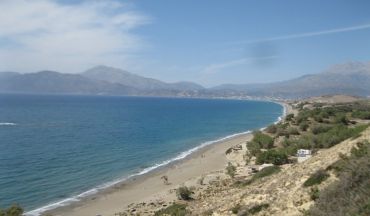 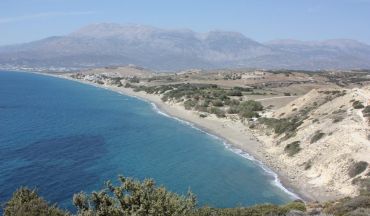